So Lao-Tzu, Buddha and Christ go to the Westbank, you see, and Lao Tzu says... 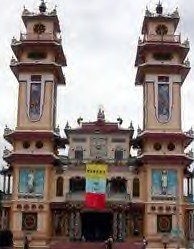 On the way home, just past the broken, lonely hull of an abandoned Walmart (site of a
fierce gun battle during Katrina), just off the highway, in the middle of strip mall suburbia, I saw the glimmer of what looked like nothing less than a castle from a Chinese fairy tale.

I'd glimpsed this mirage once before, about a year ago, looming up behind a line of ragged trees. Then it disappeared. I never did see it again. I convinced myself that I had hallucinated the whole thing and forgot about it. Unitl today.
Now, however, the trees have been cleared a bit more, due to the storm, and the view is better. Today, with it clearly in my sight, I drove down a little bit, and there is was.

Sitting there, the most incongruous thing you can imagine, in the middle of a few suburban track houses, a few trailers, nestled in the cypresses and milkweed was a flamboyantly ornate Cao Dai-ist temple.
(Cao Dai-ism, so I've learned from my Vietnamese friend/hairdresser Ha, is a strange Buddhist/Christian/Taoist sect originating in Vietnam.)
For whatever reason, they've erected a version of the temple above just off the highway in Harvey, Louisiana.

(Don't tell anyone, but sometimes I actually love the Westbank.)
Posted by jason at 7:52 PM 1 comment:

There's this girl in one of my classes.

For the first few weeks of the few months I've been teaching her, she just blended into the mass of students before me. I have nearly 180 students after all. It's taken a while to differentiate between them, but by now, I have.

She sits right up near me, in a very overcrowded classroom. Perhaps that was the reason I didn't really notice her. She is, after all, literally right under my nose, all of 2 feet under my nose to be exact. It's hard to see that close.

She's an honor student. The honor students use my classroom to help tutor other struggling students each week. Since their moderator is an inveterate no-show, I usually watch over them. (Gratis)
Of course, there's no tutoring going on, since tutorees are even more of a no-show than the moderator. The tutors, thus, are left to their own devices....usually a lot of arguing about restaurants.

A few months ago I was distracted from the monotony of grading and watched the social dynamics unfold before me.

I think it was then that I became fixated on her. As the other girls and guys clumped themselves into little groups, arguing, chatting, flirting, my student sat primly in her desk, waiting for tutorees who will never show.
She didn't use the time doing her own homework. She didn't talk. She didn't even put her head down and sleep. She ignored the chatter and giggling, the flirting and waited alone, silently, primly, for tutorees that would never come.

The other students don't actively shun her. There's no active ostracizing going on. It's nothing like that. I've never once heard anyone ridicule her (and Lord knows, they *do* ridicule each other, sometimes mercilessly), and as a smart, ungainly young woman she is certainly bait for ridicule...and we all know how horrible high school is. No, I've never seen anyone ridicule her.


But I've never seen one talk to her either. Ever.

It's as if she is just there to them, like she was to me for the first few weeks of school.

I think it was right there that day after school, as I sat hearing her peers chatter and argue and flirt, watching her sitting in her desk waiting primly, that I put aside my red pen....and felt my heart break.

I think I would have cried if I could have.

Now, I know, I know, it doesn't take a psychotherapist or anything to realize that I'm projecting onto her. That's pretty obvious. I have always identified with the lonely. It goes very far back, and is deep seated.

But it just feels more than that for some reason. Yes, it may be "about me" in way, but it's *not* about me too, if that makes any sense.

I was shocked to meet them. I had been through the endless line of failing and borderline students' parents. That's who you meet at these things. That's who you're there for. That's who you're prepared for. Certainly not for the parents of someone like her. I was actually taken aback by them being there. They disrupted my train of thought.

I was honestly flustered.

At that, her daughter, whom I've never seen smile, not once...not ever...lit up. That made me happy.....but not happy enough to not be still worrying about her right now.
Posted by jason at 7:49 PM 5 comments:

The other day I found myself wandering back to the Thomas O'Brien aisle of Target. Partly due to the midcentury modern esque furnishings he's pushing there, but also, I have to admit, the tiny black and white photo. Yes, I've developed a strange crush on yet another designer. The fact that he seems to be of the Black Irish persuasion, well, that's more than enough to make me swoon.
Here's the only photo I could find of him online, strangely enough....not a very good one, but ironically it features a long lost former crush of mine (Genevieve from Trading Spaces) 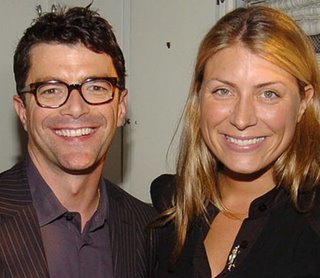 Brace yourself, the next crush is even more guilty: 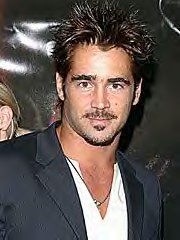 Yes, yes, yes. I know I shouldn't. I know. But I can't help it...the black Irish
get me every time. Besides, "A Home at the End of the World" might change your mind about Colin.

Now, onto a long standing guilty crush of mine, yet another designer named Tom. Mr Ford (formerly of Gucci fame) I found myself bying a copy of Vanity Fair the other day, simply because of his pictures. Though Scarlet Johanson (another ubiquitous crush) was on it too....so I didn't feel too guilty.

I know Tom Ford is almost too slick for comfort, but goddammit, he's sexy.....and
besides, he bears a more than passing resemblance to the last guy I dated....who was also (ironically ?) a fashion designer.
Ahem. 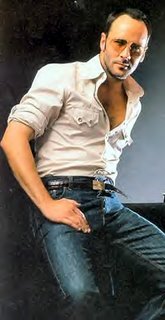 I were gay, and well from here. but unfortunately I am straight and going back tomorrow.
But, your post struck a nerve cause it pretty much expressed what we are all looking for.

good luck to you sir

Especially considering that this is the only response I think I've ever gotten from this ad, well, except from the occasional
Russian mail order bride service robots, that is.
Posted by jason at 9:54 AM 3 comments: