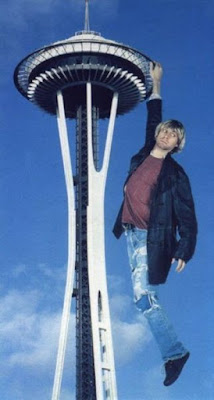 Neither John nor I has ever been, so we're a bit clueless.

The chief attraction is that it's not hell on earth New Orleans in July.
Anything else, I figure, is gravy.

I've never been anyplace so far north, or so far west....or so far white.
I've been studiously studying what white people like to minimize the culture shock, but I'm not sure if that'll help.

Desperate for some help, I even posted an ad on the Seattle Craigslist.
Um...no, not like that. Jesus, you people have dirty minds.

Speaking of which, did you know that craigslist requires a phone number to make a post now? WTF
Very invasive. I'm sure I'll be bombarded with who knows what sort of crank phone calls now.

Thus far, no helpful Seattlite has responded to me, however.

I mean I expected at least one:

"Why don't you look on the internet, stupid bitch.
Do I look like the Chamber of Commerce?"

But not even.
ahem

So, any of you ever been up there?
What do you recommend, you know, after we've seen Starbucks?
Posted by jason at 11:53 PM

Sweetie, it's no surprise you haven't gotten a response. Seattleites can be assholes - they're all convinced that everyone wants to move there and spoil their paradise. Half of them moved there in 1996 and the other half will inform you, quite huffily, that they're "fourth-generation Seattleites!" - as if that's a Brooke Astor pedigree and not a reason to burst out laughing. That said...

The natural beauty there in the summer is a marvel to behold. Anything on Elliott Bay will be gorgeous with sunny weather. They have a nice sculpture garden there overlooking the bay, and the Seattle Art Museum can be nice too.

Capitol Hill is the established gay district - very pretty houses, some dull bars, fun to walk. Stay off Broadway unless you want 100x the number of gutterpunks you can see on Decatur in one evening.

For such a progressive, nonmaterialistic blah blah blah city, you may be surprised to find that a lot of the city is set up for, well, shopping. Do not point out this contradiction; it is considered rude. Also do not take offense if a local finds out you're from the South and gets uncomfortable, thinking you might suddenly pull out a KKK robe and go riding up Queen Anne Hill with a noose. Seattle is overwhelmingly white with a skinhead problem, but to point out that racism isn't exactly the sole legacy of the South is also considered gauche.

The pan-Asian cuisine is really good. Elsewhere you might wonder why they never learned to season food properly, but you can always eat at home.

Do not be upset if people are excruciatingly polite but a bit distant - this is a well-known phenomenon known as "the Seattle Freeze" and translates roughly to "I already have enough friends, thank you." Depending on your mood, you can either bask in their good manners or needle them by being overly friendly, like a huge Southern lapdog. They will flee.

By the third night, you and your new sweetie will say "Let's stay in and look at the view." It's an incredibly romantic city for two, but the people can get on your nerves something fierce.

Great coffee (as you would expect), great beer (if you like beer) and I'm fond of both the airport and the train, both of which put New Orleans to shame. Generally they do cleanliness and efficiency well. Enjoy that. Oh, and compliment them on being 'weird' - compared to New Orleans, it's about as weird up there as Wacky Shirt Day at an insurance office, but they enjoy feeling mildly madcap.

Overall, it will be gorgeous, splendid, rugged weather, spoiled only by several million Seattleites all out trying to enjoy it at once. That's when you and your sweetie go back to your hotel, look at the view out your window, and commit acts that would simultaneously shock and thrill Michele Bachmann.

Have fun, you crazy kids!

PS: If you are at a fishmarket, ask to see a "geoduck." Trust me on this.

You MUST visit Archie McPhee!

Seattle is great, I've always found the people to be open and friendly. I'd suggest a drive up to Skagit Valley, largest tulip fields outsdie Holland. Amazing! The ferry to Bainbridge Island is fun and if you're into it, check out the Olympic Peninsula. There's The Hoh Rain Forest with the most amazing scenery. All in all, it's one of my favorite cities. Hope you have a great time!

i've never been, so, i gotz nuttin, sugar! have fun! xoxox

They have ferries that leave Seattle to different islands or towns. Might be a fun day trip.

It's very beautiful there. You can see Mt. Rainier from everywhere. Just walk around and explore. Be adventurous!

here, I did the work for you:

OMG!!! Yes you must visit Archie McPhee. That is the only reason I even want to go to Seattle. There, I admit it I love their crap.

wow....this is some great info!
thanks all.
(and rest assured, Archie McPhee is on the to see list.)

You know, I used to live there, before I fled back to the south and New Orleans. Everything Anonymous Jason Fan said is quite right.

Space Needle for drinks (NOT FOOD) and the buildings around it from the World's Fair are very groovy Space Age stylin' and completely useless.

Dahlia Lounge on the edge of downtown for dinner.

One afternoon, cruise through Queen Anne Hill (don't bother to stop. Pretentious bitches.) across the canal on the very cool drawbridge to the perfectly nice Wallingford neighborhood and the charming Teahouse Kuan Yin there. Trust me.

The art museum is worth a look-see, but AJF is right, the sculpture garden and the park it's in are better (they're not adjacent to the art museum which is downtown.) But best is the Frye Art Museum, a little teeny place east of downtown. The shows and the collection are okay, but it's a way beautiful building.

Be sure to walk up from downtown through Freeway Park to the gay hood Capitol Hill. The park is very 70's architecture.

The ferry out to Bainbridge Island is nice, sweet little village. The point is to ride on the ferry and see the bay, not to hang out there.

It's amazing how steep the hills of downtown are. Punishment to poor little swamp bred legs. You must be strong grasshopper.

My best friend was there for a year during college. She told me about a rave at the aquarium and how all the kids pickled with ecstacy were manhandling the starfish in the petting tank. So, if you go to the aquarium pet a star fish as he probably still has a bit of it in him and will love you for it.

As the last time I was in Seattle was with Peenee, I was going to chastise him if he hadn't commented. But as he has, heed his advice. And that of Anonymous, whoever he or she may be. And just be glad to get out of NoLa in the summer. You'll have a wonderful time!

Isn't that whole asking for your phone number a result of that Craigslist serial killer? Just wondering. It seems right. Have a great time.